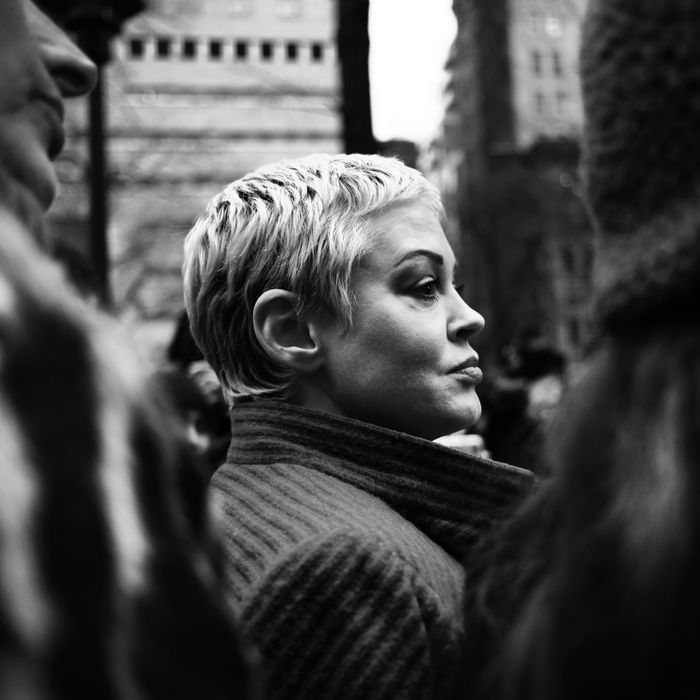 Rose McGowan has responded to the sexual-abuse allegations against artist Marilyn Manson, to whom she was briefly engaged two decades ago. “I stand with Evan Rachel Wood and other brave women who have come forward,” McGowan said in a series of tweets, excoriating Hollywood and the music industry for “protecting predators and selling their sickness to the world.”

In an accompanying video, McGowan — who was among the first accusers of the now-disgraced mogul Harvey Weinstein, and who emerged as a leading voice amid Hollywood’s overdue reckoning with sexual harassment and abuse — said her relationship with Manson was “not like that” of Wood and the four other women who have since come forward with allegations against him. However, McGowan emphasized, “That has no bearing on whether he was like that with others before or after,” adding that she is “profoundly sad today and disgusted.”

While Wood did not publicly accuse Manson of abuse until earlier this week, there has long been speculation that he subjected her to such treatment. In 2018, when advocating for a bill to protect sexual-assault survivors, Wood testified before Congress that one of her former partners had raped her and forced her into “sick rituals” involving “binding me up by my hands and feet to be mentally and physically tortured until my abuser felt I had ‘proven my love for them.’ ” At the time, Wood declined to name her alleged perpetrator out of concerns for her safety, but on Monday she confirmed the suspicion that the former partner she had referred to was indeed Manson.

Seemingly prompted by Wood’s bravery, at least four other women have come forward with equally disturbing stories about Manson’s alleged predatory behavior. One woman, Manson’s former personal assistant Ashley Walters, said Manson “would offer me up for sexual encounters to please potential collaborators or friends and bragged that he could do so.” Another woman, named Gabriella Accarino, said Manson would tie her up and rape her; after the first alleged incident, she continued, “I sobbed on the floor of the hotel room and when I looked at him, he was smiling. He told me he knew that’s how I loved him because of my reaction.” All the women say they have faced a variety of mental-health issues as a result of their relationship with Manson. “I have night terrors, PTSD, anxiety, and mostly crippling OCD,” the actor Ashley Lindsay Morgan said on Instagram. “I try to wash constantly to get him out or off of me. I am coming forward so he will finally stop.”

Late on Monday night, Manson denied the allegations in a statement posted to Instagram, calling them “horrible distortions of reality.” He wrote, “My intimate relationships have always been entirely consensual with like-minded partners. Regardless of how — and why — others are now choosing to misrepresent the past, that is the truth.”

Still, the repercussions for Manson came swiftly. He has been dropped by both his record label, Loma Vista Recordings, and his talent agency, CAA, and a number of networks have removed him from various projects.

Get the Cut newsletter delivered daily


By submitting your email, you agree to our Terms and Privacy Notice and to receive email correspondence from us.