By Charlie Lankston For Dailymail.com

Prince Harry may have taken one step too far in his attempt to embrace the Los Angeles lifestyle, according to actor Rob Lowe, who claims that the 36-year-old is now sporting a ponytail.

Rob, 56, made the wild claim during an interview with James Corden on The Late Late Show, during which he revealed that he had spotted a man he believed to be Harry driving around their Montecito neighborhood with a long hairstyle.

‘I just ran into your countryman, the English treasure, Prince Harry, at the stoplight 10 minutes ago,’ Rob told British-born comedian James, before telling him that he may have a ‘scoop’ regarding the royal. ‘It was very, very quick — don’t totally quote me on it — but it looked like he’s wearing a ponytail. 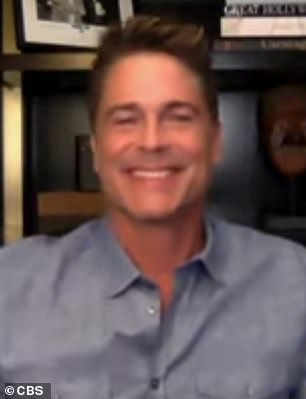 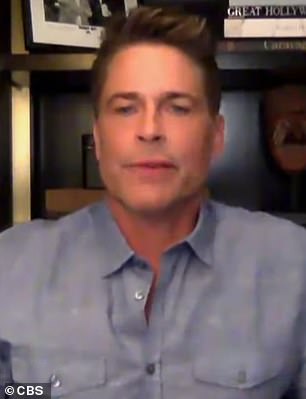 Scoop? Actor Rob Lowe claims that Prince Harry is now sporting a ponytail, after spotting the Duke driving around their Montecito neighborhood with what looked like ‘long hair’ 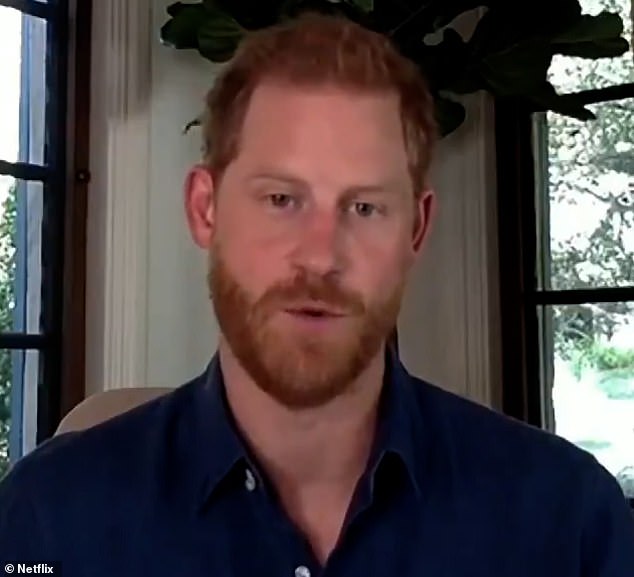 Unlikely? The 36-year-old Duke of Sussex appeared in a promotional Netflix video released in the first week of December in which he was seen modeling his signature short hairstyle 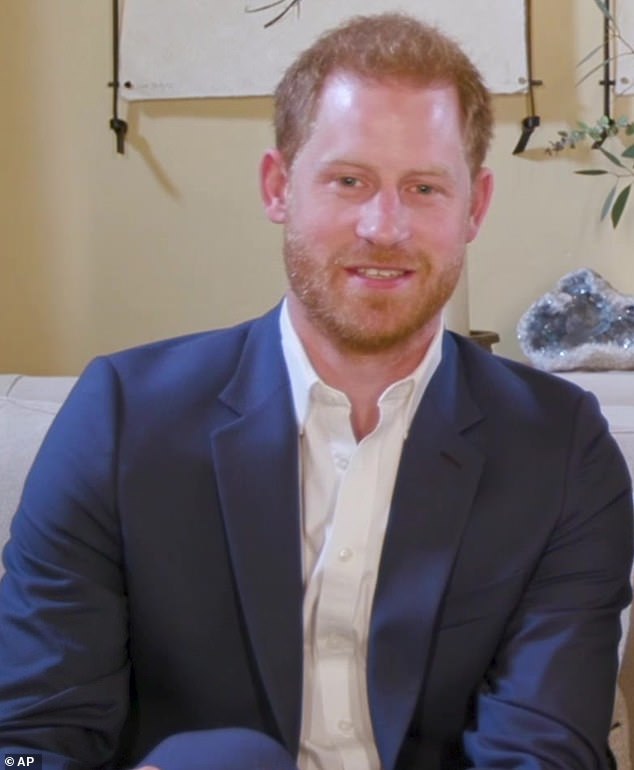 Something different… Rob was adamant that the man he had seen was Harry (pictured in October), despite TV host James Corden expressing serious doubts over his story

‘I’m just saying. It looked to me as a casual observer that his hair had grown very long and was pulled back very tightly by what I can only assume was a ponytail.’

Unsurprisingly, James was quick to voice doubt over Rob’s celebrity spot – insisting that the actor must have confused Prince Harry for another local man, telling him: ‘A ponytail? I’m certain that isn’t true.

‘Do you know what I think’s happened? I think you didn’t see Prince Harry.’

However Rob was adamant that he had in fact seen the royal, confessing that he actually followed the man in question to Harry and Meghan Markle’s $14.5 million Montecito mansion to make sure that it was him.

‘It was him because I have to say… I followed him to the house to see if the car went in,’ Rob admitted, noting that he was all the more aware of who he had seen because Prince Harry has been so ‘reclusive’ since moving to the neighborhood in the summer of 2020. 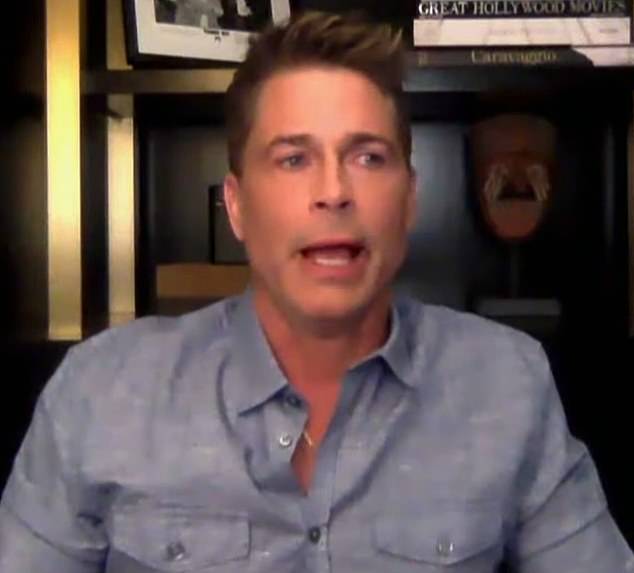 Double check: The actor confessed that he followed the man he saw to the $14.5 million mansion Harry shares with Meghan Markle in order to make sure it was in fact him 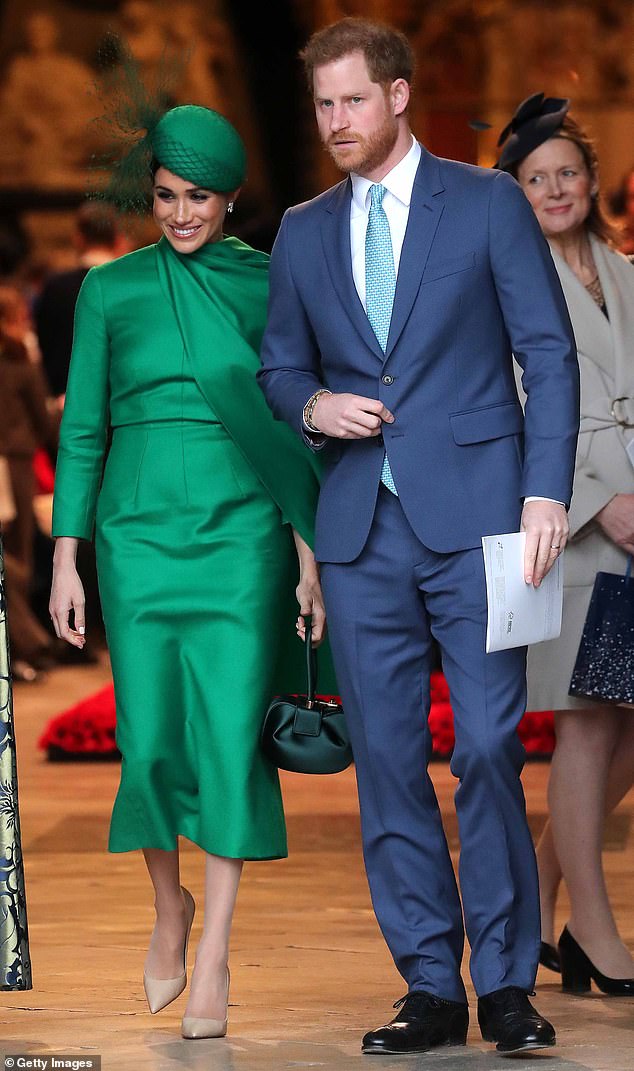 Making a change? Harry (pictured with Meghan in March) has worn his hair in much the same style for years

‘He lives about a mile from me,’ Rob shared. ‘He’s been very reclusive. Seeing him in the neighborhood is like seeing the Loch Ness Monster, and I finally saw him. I finally saw him driving his car.’

Prince Harry was seen as recently as early December, appearing in a promotional video for Netflix in which he modeled the same short, neat hairstyle that he has worn for years so it seems incredibly unlikely that he has grown a ponytail in the month since then.

Rob’s unconfirmed sighting of the Duke comes almost one year to the day since the anniversary of Harry and Meghan’s decision to step down as senior members of the royal family in a move that is widely known as Megxit.

Since then, the couple have lived in three different homes: first, a secluded property on the exclusive Vancouver Island in Canada, from which they moved to Tyler Perry’s sprawling Beverly Hills mansion, which they resided in for several months before settling down in their own Montecito home.

In addition to Rob, the couple have a host of high-profile neighbors, including their close friend Oprah, as well as Ellen DeGeneres, who reportedly purchased a home near the couple at the end of last year. 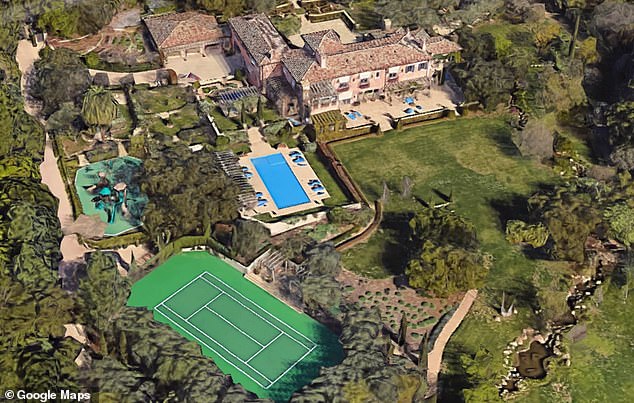 Neighborhood: Rob said he lives ‘about a mile away’ from Harry and Meghan’s Montecito home (pictured). The couple also count Oprah and Ellen DeGeneres and neighbors