A furious Charles Leclerc let rip at himself on team radio after the Turkish Grand Prix, after a mistake while battling Sergio Perez cost him a Formula 1 podium finish.

The Monegasque driver had recovered well from an initial poor opening phase to the race to haul himself close to second place runner Racing Point’s Perez in the closing stages of the race.

Perez, who had very worn intermediate tyres by that stage, was able to hold Leclerc back until the final lap when he made a mistake at Turn 9 and ran wide – letting his Ferrari rival through.

But Perez was able to get better traction out of the corner and got into Leclerc’s slipstream on the run down the long straight. As the pair braked for the final sequence of corners, Leclerc made an error and ran wide – losing spots to both Perez and his own Ferrari team-mate Sebastian Vettel.

Afterwards Leclerc could not hide his annoyance at losing a potential second place so close to the end – and claimed it was a bigger blunder than his famous qualifying crash at Baku last year.

The team tried to calm him down and asked him to turn the radio off, before Leclerc continued: “I am so sorry. I am fucking stupid. As much as in Baku.” 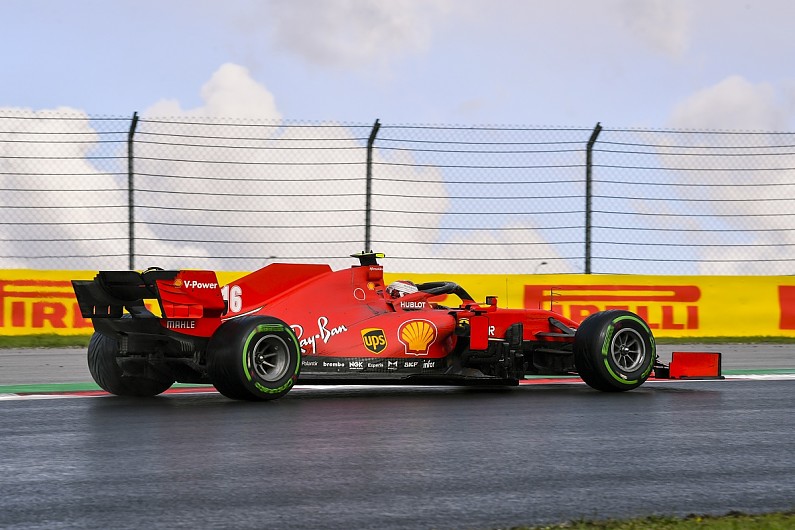 Leclerc has been known to be very critical of himself on team radio, and has spoken in the past that being so honest and harsh on his errors helps him improve as a driver.

Having calmed down in the hours after the race, Leclerc did not shy away from maintaining that it was his error in trying to defend on a wet patch of track.

“In Turn 9 we were very competitive and Sergio on that lap did a mistake,” said Leclerc. “So in Turn 10 I tried to go around the outside, but the grip was very poor.

“The Racing Point in general with the slipstream was very quick on the straights, so he manages to be on the right side, and I locked up at the end.

“To be honest, looking back at the data I didn’t do anything crazy. Same braking point, same pressure, but obviously it was more wet on the inside.

“So it’s completely my mistake. I should have anticipated that, so I went straight. It was actually very difficult to make the corner anyway. Which I fortunately did. And yeah, that’s it.”

Autosport has produced a standalone special magazine to celebrate our 70th birthday. All current print subscribers will receive a copy for free. To pre-order your copy of the 196-page Autosport 70th Anniversary issue, please go to: autosport.com/autosport70th