Liverpool have a rich history of pulling off the most extraordinary comebacks but, even by their standards, the Premier League title looks out of touch from here.

Brighton played superbly on Wednesday night at Anfield and deserved their 1-0 win but for Jurgen Klopp it’s now a return to the drawing board as he revisits problems he would have been forgiven for thinking he had banished after impressive wins over Tottenham and West Ham.

So what could Klopp change for Sunday’s showdown against Manchester City at Anfield? Sportsmail takes a look… 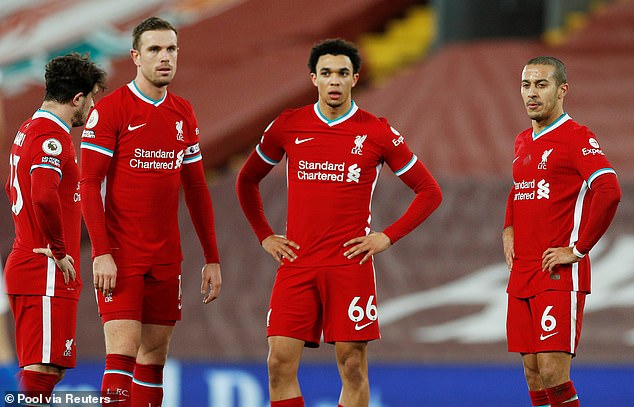 It has been difficult to gauge precisely what Thiago has brought to Liverpool’s midfield on a consistent basis during his first regular run of games in the team. He hasn’t been bad, but he hasn’t been as good as expected either.

There was a moment in Liverpool’s win over West Ham at the weekend where Gary Neville compared him to Juan Sebastian Veron’s time at Manchester United. That felt too far – Thiago is playing in a midfield that doesn’t have Virgil van Dijk or Joe Gomez behind it and, at times, has instead been tasked with protecting the two players who he’d have expected to have alongside him in Jordan Henderson and Fabinho.

But against Brighton, and against other teams too, Thiago found it difficult to dictate play in the way he is renowned to. He has started in a midfield three alongside James Milner and Georginio Wijnaldum in both those matches and, while there have been flashes of the flair and invention that make him such a enthralling player to watch, it hasn’t been anything more than that.

In the first half against West Ham, he picked out Divock Origi with a stunning through ball while against Brighton he started a clever free-kick routine that nearly led to an equaliser.

Playing City might suit his game – it’ll be a more high-octane match where he can run on instinct a little bit more, rather than collecting the ball and looking up at two lines of players ready to repel him. But Liverpool would have been hoping his vision would help them break down teams such as Newcastle, Brighton, Southampton and Burnley – instead, they’ve dropped points in all those games. 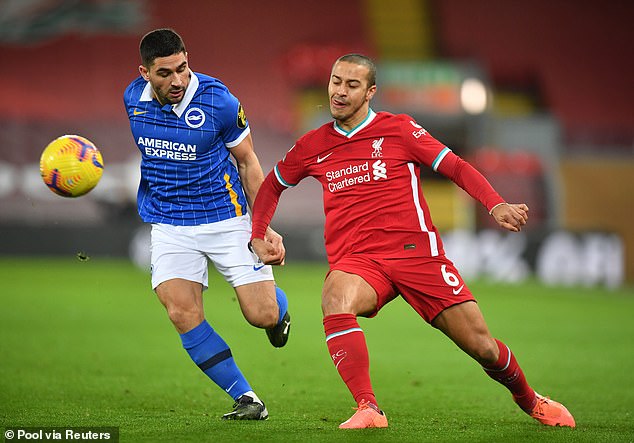 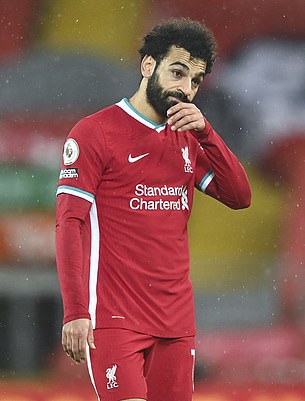 Liverpool have been heavily reliant on Mohamed Salah, especially without Sadio Mane in their recent games

Like all good goalscorers, there are times where Mohamed Salah clings onto the ball for too long. It isn’t anything new, especially at Liverpool – Daniel Sturridge and Luis Suarez were the same in the 2013-14 season, where they nearly propelled Liverpool to the title.

But when Salah is without Sadio Mane, there is an unspoken onus on him to step up to the plate a bit more, which against Brighton contributed to him repeatedly running into trouble. Credit must also go to Brighton’s defence, especially Adam Webster, who dealt with him brilliantly at Anfield.

Part of Salah’s genius is that even though cutting in on his left is so predictable, there are times when it is still so hard to stop – look at his first goal against West Ham last Sunday as an example. But without Mane, Liverpool’s attack is blunted and Klopp could benefit from having Salah a bit more central to the action.

If Mane doesn’t make a return for City on Sunday, it is something Klopp could consider. Salah through the middle could also make it harder for City’s defence to anticipate what he is going to do when in possession and, when the route to goal is as instinctive as it is to someone like Salah, it might make him more dangerous.

The Brazilian has been a little bit of a lightning rod for criticism this season and in front of the cameras Klopp has not needed a second invitation to stick up for the man who has served him so tirelessly at Liverpool.

But make no mistake about it, Roberto Firmino has not reached his finest form this season and against teams like Brighton his head seems to drop after too much time hitting dead ends.

Klopp seems to sense it too – he replaced him with Curtis Jones in the 79th minute with Liverpool desperate for an equaliser.

In some ways, that felt damning on Firmino. If you desperately need a goal, you normally keep your No 9 on the pitch. Things like that can hit a striker’s confidence as much as missing a decent chance. Klopp needs to put his arm around him between now and Sunday, regardless of what he says publicly. 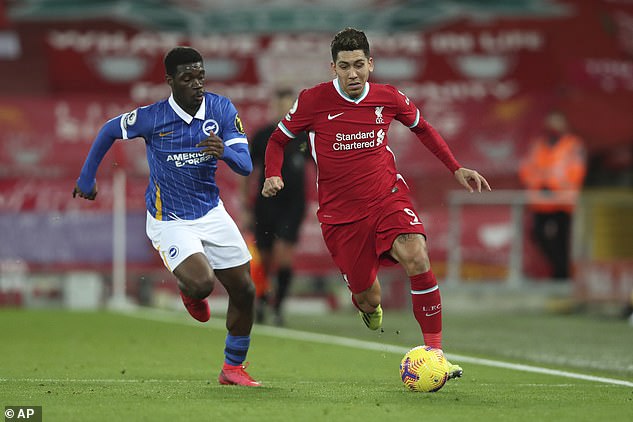 All the above has contributed to Liverpool looking languid on the ball in recent games. Yes, there’s a packed fixture list. Yes, Liverpool have had a lot of injuries so the players that do play may understandably be feeling particularly leggy.

But the pace of Liverpool’s play when in possession of the ball hasn’t been good enough lately. There doesn’t look like there is much urgency to claim three points. Tempo, of course, is influenced by confidence and the more belief there is in the team, the more comfortable players feel with faster passing.

It is particularly essential when facing teams who are prepared to spend swathes of matches sitting back and defending, like Brighton were.

Liverpool’s best chance on Wednesday came when a slick passing interchange led to Trent Alexander-Arnold pulling the ball back from the byline to Salah, who fired narrowly wide. They need more of it. 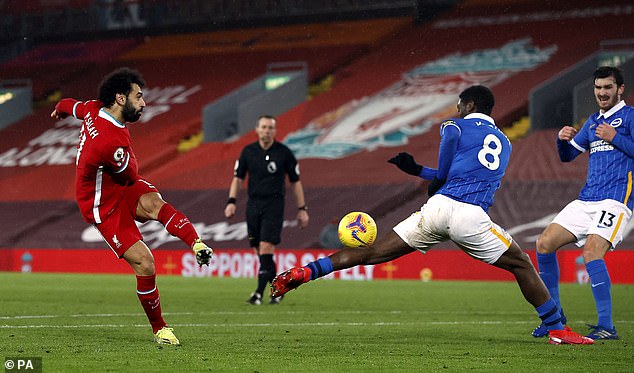 GET HENDERSON BACK IN MIDFIELD… OR CURTIS JONES!

Plenty has been made of Liverpool’s midfield, and overall team, being disjointed with Henderson in defence, even though he has performed admirably since stepping back.

But another of Liverpool’s best midfielders this season is Curtis Jones, and he has repeatedly found himself on the bench in recent weeks. Some time out of the spotlight could have done him good after stepping up so valiantly when Liverpool’s injuries were piling up again earlier in the campaign.

Jones made a fabulous contribution when he came off the bench against West Ham, providing an immediate assist for Salah’s opener with some direct running and inventive passing.

It was a mistake from Klopp to leave Jones on the bench until the 79th minute against Brighton and the 20-year-old is good enough to start against City on Sunday. And certainly fresh enough. 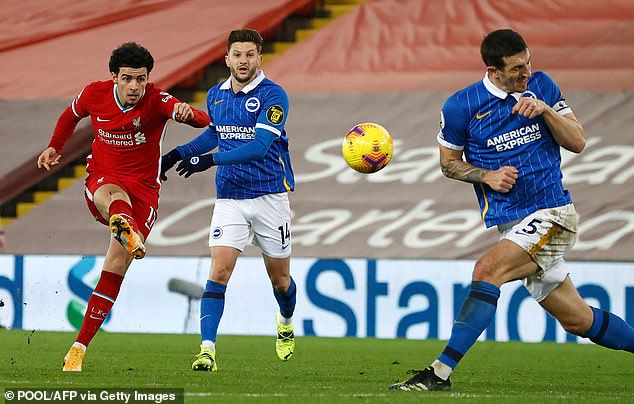 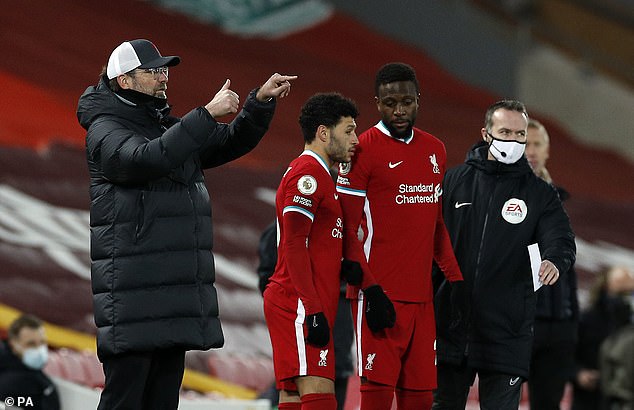 For Jurgen Klopp, it’s a huge run of games ahead that will shape the rest of Liverpool’s season

AND IT’S CRUNCH TIME FOR LIVERPOOL

It’s City on Sunday, but it doesn’t get any easier for Liverpool after that. They meet Leicester the following weekend at the King Power Stadium, with Brendan Rodgers’ men in hot pursuit of a Champions League place.

They then play RB Leipzig in the first leg of their Champions League last-16 encounter before the Merseyside derby against Everton at Anfield. Carlo Ancelotti’s men are, at present, four points behind Liverpool but have two games in hand.