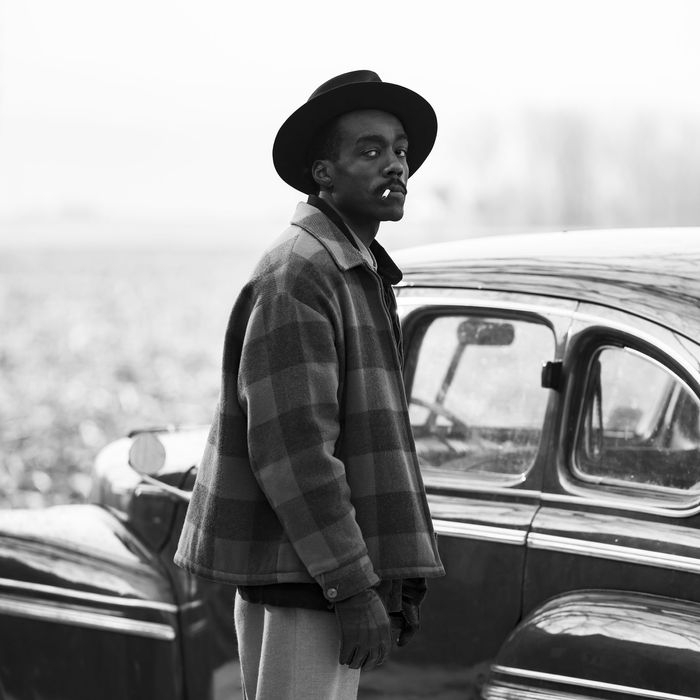 When we last saw Omie Sparkman — former boxer and Loy Cannon loyalist — he was promising his boss that Constant Calamita would soon pay for the crime of killing Doctor Senator (and other offenses). In “East/West,” Omie begins the episode on a journey to make good on that promise, one that takes him to a middle-of-nowhere gas station somewhere between Kansas City and the town of Liberal, Kansas. That’s a major development in this season’s storyline, but it also mostly serves as a framing device for the episode, season four’s oddest episode and as wild a departure as the series has ever attempted.

“East/West” announces itself as an atypical outing from the start, with a Bertrand Russell quote, and a slow pan over some rubble that lands on some pages from the book The History of True Crime in the Wild West. Specifically, it lands on a page from the book’s seventh chapter, “Who Shot Willy Bupor?,” an investigation into a strange crime that transpired in 1950 at a small filling station. (Freeze the frame and you can read a somewhat baffled account of the episode’s final moments.) Then the image switches to black and white and the events leading up to Omie and his captor’s arrival at the fateful gas station.

After a quick stop at a plaque marking the birthplace of astronomer Clyde Tombaugh, discoverer of Pluto, we learn that Omie is still in search of Calamita and, after a brief conversation with the gas station attendant — the doomed Willy Bupor (Cedric Young) — that ends with Omie agreeing to do some painting in return for being allowed to sit and wait for Calamita’s inevitable arrival. It also allows Omie to continue a conversation with Aldo Abruzo (Joel Reitsma), the Fadda henchman Omie’s stuck in his trunk. That talk mixes Aldo’s casual racism with some not-entirely-off-base insights about how people at their level of their respective organizations do all the work while the bosses reap the rewards. That doesn’t take long, and after Aldo attempts to make a break for it when Calamita arrives, Omie, no doubt frustrated by Aldo’s nonsense — shoots him dead. If he’s going to take on Calamita, Omie at least needs the numbers to be even.

We’ll have to wait a while to find out how that plays out, however, as the bulk of the episode flashes back to chronicle Rabbi and Satchel’s attempts to find safe haven away from the Kansas City gang war that’s left them both exiled. That first involves a stop at Liberal, the “Pancake Hub of the Universe,” located just on the other side of an unfinished billboard reading the “The Future is…” But first, Rabbi needs to stash Satchel somewhere safe, choosing a rooming house called Barton Arms. If the plaque outside marking it as the former home of “the infamous Mellon family, who lured unsuspecting travelers into their home, tied them and then dispatched them with a hammer” didn’t already suggest this might not be the most comforting way station, the contents of the Barton Arms surely do. (That the Mellon family was never caught, per the plaque, suggests a thread left dangling for a future season.)

Once inside, Rabbi and Satchel have to answer a series of questions to determine whether they belong on the west or east side of the house, questions about their preference between Plymouth Rock and Sutter’s Mill and Eisenhower and McCarthy, whose voice Rabbi heard on the radio during the drive. “We don’t follow politics,” he replies to the desk clerk. “Eisenhower it is,” she says. And though the desk clerk is Black, she warns them that the sisters who own the Barton Arms “don’t care much for coloreds.” But they can still stay. They just need to “steer clear of them.” They’ll also need to navigate the line running down the middle of the whole house that separates east from west. This is not a place constructed with the comfort of its guests in mind.

It does seem like a place that attracts eccentrics, however, including a man receiving some kind of medical care from a teenager in the room next to theirs. And, as a bonus, Satchel finds a delightful little dog named “Rabbit” locked in their wardrobe, immediately claiming her as his own. Swapped, targeted for murder, and whisked away, Satchel needs some warmth and companionship in his life. He’ll need it even more at episode’s end, even after making the acquaintance of fellow guests like the chatty, Dale Carnegie-inspired aluminum siding salesman Hunk Swindell (Tom Hopper) and Hickory J. Milch (Japhet Balaban), a young man heading to Texas to make his fortune in oil. This is a strange place to stay a spell. Of course, any Coens admirer paying attention to the name knew it would be even before Rabbi and Satchel set foot inside.

Rabbit has business in Liberal, but it doesn’t go as planned. Rather than the feed store where he once stashed some money, he finds a small appliance store manned by Beachwood Indiana (Erik Hellman), the ingratiating co-owner who deflects Rabbi’s question about a wall that used to be in the old store by attempting to sell him a dinette set. No sale. Rabbi sees the place while Beachwood takes a phone call then makes an exit, leaving poor Beachwood to worry about what he might have wanted.

At dinner, after a tense moment in which one of the sisters tries to send Satchel away, they meet even more Barton Arms guests: Pastor Roanoke and his wife (sorry, make that mother) and The Major and his niece. (Is it possible the whole Barton Arms was created just as an excuse for character names that didn’t fit anywhere else? Probably not, but don’t rule it out.) It’s the Major who steers the conversation in a direction that, thanks to some help from Hunk, shines a light on Rabbi and Satchel’s current situation. Talk of “Goldilocks and the Three Bears” prompts Hunk to volunteer that the original version was about witches, not bears, and the story’s structure, when you think about it, has no ending. The bears “get justice” but our heroine is left “back out in the cold.” She “doesn’t fit in anywhere,” not unlike Rabbi and Satchel.

That possibly contributes to Rabbi’s foul mood the next day, when he gives the man putting up the “The Future Is …” billboard a piece of his mind about the unfinished thought. (“Makin’ people live with uncertainty. It ain’t right.”) Of course, he’s already in a foul mood preparing to deal with the Indiana brothers, who eventually ‘fess up to having taken the money they found in the wall and to having spent most of it already. The Indianas seem to make it out of the encounter alive, but Rabbi leaves unhappy with his modest haul and is only able to get away after talking to a racist cop who warns him to keep Satchel out of his racist town.

Still, it’s something. And Rabbi makes plans to stick together with Satchel and leaves him alone just long enough to fetch him something sweet for his birthday. The only problem: he’s sent to the filling station down the road where the episode’s chronology comes full circle in time for a tense gunfight and the arrival of a tornado. But first, another conversation with the billboard worker (Karl Potthoff, credited as “Smoking Man”), who’s finished his task to reveal the rest of the sentence: “The Future Is Now!” Questioned by Rabbi about its meaning, he replies, “Could be a statement about the underlying unreliability of time. Or a testimony along the lines of ‘Seize the day.’ They don’t pay me to write ’em. Just slap ’em up.”

Maybe Rabbi’s still thinking about that when he arrives at the filling station where he discovers the dead attendant and witnesses Calamita kill Omie before all three get swept up in the tornado. So long Omie, Calamita, and Rabbi. (And, if there’s any ambiguity about their fates, pause and read the book excerpts at the beginning of the episode. Assuming The History of True Crime in the Wild West can be trusted, nobody’s getting out of this twister alive.)

That leaves Satchel in Goldilocks’s place. Or, more accurately, in the same position as Dorothy in The Wizard of Oz. The episode’s references to that film become explicit when Satchel opens his door and color rushes into the world of the series once again. After an uncomfortable conversation with the bandaged man he returns to his room then, the next day, leaves followed by Rabbit. “The Future is Now!” the sign tells him, offering a promise of a coming suburb in which he most assuredly would not be welcome. And instead of a yellow brick road he’s only got a two-lane highway leading him back from whence he came, or toward who knows what.

• The real Liberal, Kansas, now serves as the home of Dorothy’s House and the Land of Oz, a tribute to L. Frank Baum’s book and the film it inspired.

• In Kansas City, Rabbi always seemed softer than the gangsters around him. In Liberal, however, he looks like a much more dangerous character.

• The Bertrand Russell quote that opens the episode — “Life is nothing but a competition to be the criminal rather than the victim” — comes from a letter Russell wrote to his lover. Here’s the full context, which isn’t without relevance for this season, with its successive eras of gangsters:

People seem good while they are oppressed, but they only wish to become oppressors in their turn: Life is nothing but a competition to be the criminal rather than the victim. The world is rushing down into barbarism, and there seems nothing to do but keep alive civilization in one’s corner, as the Irish did in the 7th and 8th centuries.

• Rabbi, the most Irish of the Fadda family, even attempts something like that retreat, only to find it’s not possible.

• A wild episode, right? If the black-and-white photography seems like an unnecessary flourish until the Wizard of Oz moment, it still looks amazing, reminiscent of the way Alexander Payne shot the open plains of Nebraska in, well, Nebraska. It also helps the reality feel a little off-kilter even before we meet all the strange characters at the Barton Arms. Will we see them again? That seems unlikely, but Satchel’s time there helps establish just how lost he is in a threatening, hard-to-comprehend, and unapologetically racist world.

Keep up with all the drama of your favorite shows!


By submitting your email, you agree to our Terms and Privacy Notice and to receive email correspondence from us.