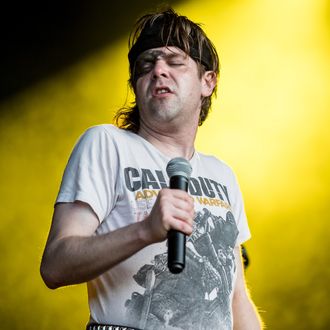 According to Pitchfork, following his attendance of Wednesday’s pro-Trump “Save America” rally, which ballooned into an attack on the Capitol, Ariel Pink has been dropped by his record label. “Due to recent events, Mexican Summer and its staff have decided to end our working relationship with Ariel Rosenberg AKA Ariel Pink moving forward,” the label tweeted Friday. Mexican Summer, which released Pink’s most recent album, 2017’s Dedicated to Bobby Jameson, was set to reissue several of the singer’s remastered albums, including Odditties Sodomies Vol. 1, Sit n’ Spin, Scared Famous/FF>>, and Odditties Sodomies Vol. 3, on January 29.

Pink was spotted on social media alongside fellow indie musician John Maus at the January 6 demonstration in Washington D.C., after which a mob of the President’s supporters smashed their way into the Capitol while Congress was in session to ratify Presidential-elect Joe Biden’s electoral victory.

Pink, however, denied taking part in the melee that has left a Capitol Police Officer and four protestors dead. “i was in dc to peacefully show my support for the president,” the musician wrote in response to a user. “i attended the rally on the white house lawn and went back to hotel and took a nap. case closed.” Tweet Pink on Wednesday, “vote for trump.”