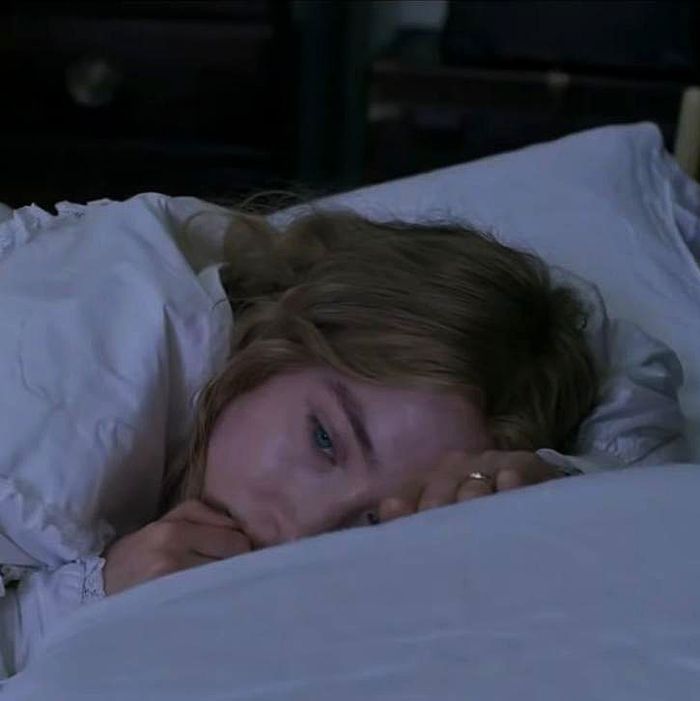 At least hanging a giant mirror with my girlfriend during intermission felt queer, unlike this movie.
Photo: Neon

To set the scene: It’s a Monday evening. The plan is to cook dinner for my girlfriend and then park it on the couch together to watch Ammonite, the new lesbian period drama starring Saoirse Ronan and Kate Winslet. We’re making chicken Caesar salad, a house favorite. Extra anchovies and lemon in the dressing. And chicken breaded in panko and fried in my cast-iron skillet such that it becomes essentially a giant, golden crouton. But still, you get to call the whole thing a salad and feel vaguely good about eating something nutritious.

What could be better, really? I thought to myself while whisking together egg yolks and oil in a metal bowl. A nice dinner and two hours of British accents and sidelong glances between two excellent actors who would eventually have some — so I’d heard — decently steamy and realistically queer sex. Plus, fossils? Delightful.

I slightly overcrisp the chicken and, after disarming our smoke detector, we sit down to eat and cue up the film. And then … nothing. Not, like, on a technical level (the HDMI-cord-to-television setup we’re using is chugging along great). Onscreen, I mean. What little proceeds involves mostly mud and crashing waves and Winslet quietly excoriating a dumb man who is just slowing her down as she trawls the coast clawing through muck for specimen. This man is married, of course, to Ronan, whom he unceremoniously dumps into Winslet’s care while he leaves town for work for a month or so. Okay, good, with him gone maybe this can finally get gay. Oh, and there’s Fiona Shaw. I’m getting major ex vibes between her and Winslet. Interesting. Interesting.

Ronan is recovering from a fever by spending days and nights in Winslet’s bed while Winslet keeps watch from a wooden chair across the room. At this point, I text my colleague Rachel Handler, “Hello, have you seen Ammonite?” “Hello yes,” she replies. “I’m a third of the way through and all Saoirse Ronan has done is appear damp to various degrees???? I’m so bored????” I respond, desperate to know if I am broken or if this movie is as much of a snooze as it seems. “It’s soooo slow and boring. There’s like 2 ok ish sex scenes,” Rachel tells me. Okay, I think, something to look forward to. “The lesbian tension requires nothing to cut it because it doesn’t exist!!!” I shout through the phone. “Yes, they have zero chemistry,” Rachel agrees, before we diverge into a conversation about how we wish this movie were about Fiona Shaw, the town’s mysterious rich dyke. (We also note the upcoming Clea Duvall Christmas rom-com, which I forewent this evening to watch Ammonite. It’s a decision I’m starting to regret.)

Fifty minutes into the movie, Ronan, finally recovering from her fever — which she got from nearly drowning herself in the frigid ocean because a “doctor” told her swimming would fix her sad, weird lady brain and can’t imagine why losing a child might have affected her in such a severe mental way — tells Winslet it’s silly she’s sleeping in a chair and invites her into bed. At this point, we pause the movie and decide to take a break to mount a giant IKEA mirror we bought months ago and never got around to hanging, so it’s been sitting in the hallway of our building threatening to crush us every time we walk by. This takes half an hour and ultimately we drilled the anchor holes way too high and slightly crooked so we’re going to have to redo the whole thing later. But it’s done for now. At least hanging the giant mirror together felt queer, unlike this movie that we now have to finish.

Rachel was right, and we watch the two “ok ish” sex scenes, but honestly I spend much of the rest of the evening yelling things at my television like, “Kate Winslet is eating out Saoirse Ronan right in front of my own eyes and I am still bored!” To Ammonite’s credit, there’s a moment where Ronan is atop Winslet and she’s leaning her face and arms and entire body weight into the wall the bed is pushed against that made me raise my eyebrows for just a moment and think, Oh, okay, somebody did their homework. But that moment is extremely fleeting and truly no time later, Ronan’s husband — announced via a letter — sends a carriage that whisks her away. At this point, it’s frustrating but not surprising that the two don’t talk about the departure in any meaningful way. Which, well, just Google “lesbian processing” if you’d like a better idea as to why this feels hollow.

Eighty percent of the film’s dialogue happens in the last 15 minutes and, Oh, so now they’re talking and fighting and madly in love. Where was that for the last hour and a half? Specifically, it happens when Winslet hops on a boat and goes to visit Ronan at her fancy-ass house in London. When she arrives, Ronan reveals she’s created an entire bedroom for Winslet and hopes she’ll move in … forever? With her? Because her husband is apparently so obsessed with fossils now he won’t care? Winslet is, understandably, like, “No,” and also, “Why didn’t you tell me any of this in the letter you sent summoning me here?” She also tosses in a hell of a barb about how if she’d been better warned she wouldn’t have wasted the boat fare. Now THAT is the dyke drama I came to see, but it’s simply too little, too late. I don’t care how gorgeously framed the final shot is, there’s just no there there.

As the movie ends, the two, obviously, because this is a lesbian drama, do not end up happily ever after. (That’ll be Tuesday night’s entertainment, I can only assume, when we watch The Happiest Season.) My girlfriend makes a comment that it seems possible it took as long to watch this movie as it does for a real fossil to form in the wild. Which I recognize was probably an artistic decision, but not one that works in Ammonite’s favor. Joke is on her though, because she’s right. My body is now permanently petrified into our couch. A fossil of the gay I was three hours ago.